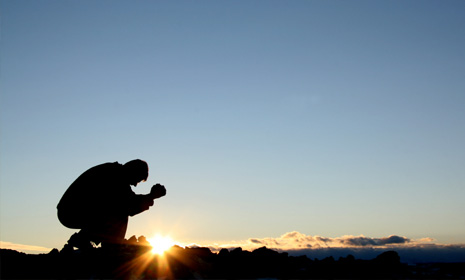 I’ve asked this question to myself too many times to ask. I know what prayer involves: petition, thanksgiving, etc. But, what is it?

Eugene Peterson has a helpful answer to this question in his Working the Angles: Peterson says simply that prayer is “answering speech”. He explains what that means:

[P]rayer is never the first word; it is always the second word. God has the first word. Prayer is answering speech; it is not primarily “address” but “response.” Essential to the practice of prayer is to fully realize this secondary quality. It is especially important in the pastoral practice of prayer since pastors are so frequently placed in positions in which it appears that our prayers have an initiating energy in them, the holy words that legitimize and bless the secular prose of committee work or community discussion or getting well or growing up…

For Peterson, prayer is not a human initiative toward God: it is not man attempting to begin a conversation with an aloof God. Rather, prayer is a response to the first initiation of God’s own word to mankind. Prayer is a logical response to God’s condescension and communication with us.

Peterson goes on to explain that the best way to pray is first to listen! God talks and acts first, then we respond. And so listening to God’s communication to us is how we learn talk to him. And of course, listening to God entails reading his divinely inspired Word: it is there that we hear his speech, see his acts, see his gracious iniative. And it’s there that we can respond.

Peterson also puts his finger on something when he says that rather than seeing prayer as “answering speech”, we are tempted to see prayer as the “first word”, something that “gets God’s attention”, something that “makes God act”. In other words, it is our temptation to see our own words as something that can initiate God’s response to us. This is dangerous, he says, because it makes human beings the “first cause”. In fact, Peterson will go so far as to call this mindset “closet Pelagianism”!

Jesus himself warned against the thought that prayer is something that “gets God’s attention”. Jesus says in Matthew 6:7-8:

And when you pray, do not heap up empty phrases as the Gentiles do, for they think that they will be heard for their many words. Do not be like them, for your Father knows what you need before you ask him

[A common] misconception of prayer that Jesus attacks is believing there must be much of it before it works… Some pagan convictions taught that the gods are reluctant to hear prayers unless prayers are long, and that only when the petitioner has proven oneself sincere by spending time in confession, praise, or even quiet do the divinities listen… (Christbook I, 289)

The thought during Jesus’ time was that in order to get the gods to listen, one must pray a lot and yell and get their attention; and then finally will the gods lend an ear (recall to mind the story of the prophets of Baal in 1 Kings 18, who went to such lengths as to cut themselves to gain the gods’ attention).

But what Jesus says is that “the Father already knows what you need before you ask” (v. 8)! What is implied in this statement is that God, your Father, knows and cares, and is already attentive. You don’t need to “pray much” for him to listen; you don’t need to initiate the conversation. Jesus denounces this thought that the human must initiate through prayer to get God’s care and attention. God the Father already knows what you need, and already cares. Rather, prayer is a response to God’s Fatherly care and love!

Don't Be More Spiritual Than God!